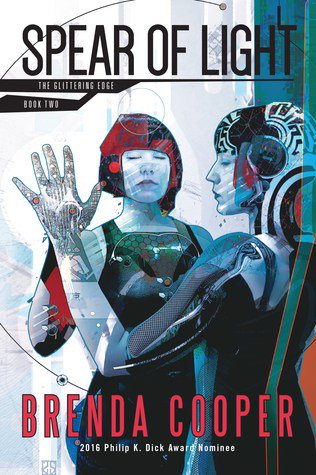 Spear of Light is the second book in The Glittering Edge duology. And it has been my introduction to Brenda Cooper’s science-fiction writing.

For the most part, I am impressed. While I missed Edge of Dark, the duology’s first book, I am pleased at how smoothly I was drawn into Spear of Light, a complex but engrossing tale of humans, post-humans, and robots on the “re-wilded” planet, Nym. This second book in the duology stands nicely on its own.

The general flow of the novel is summarized on other sites, such as Amazon and Pyr, so I won’t rehash it here. But a lone ranger, Charlie Windar, wants desperately to save his rebuilt planet and is caught in the middle of an approaching war between the post-humans (the Next) and the Shining Revolution, a group of humans who want to attack the Next, no matter if it means Nym will be wrecked (again) in the process.

Meanwhile, the Next, who previously were banished from Nym’s solar system and later returned in force, are now quickly building a massive new city on Nym. And the humans caught between the Next and the Shining Revolution cannot figure out why the Next seem driven, this time, to uncover something mysterious within Nym’s ancient history.

(Thanks, Pyr, for sending a review copy.)

Technology now makes it relatively easy to build simple robots that can be controlled remotely or can control themselves autonomously using built-in sensors and software.

This engaging how-to guide focuses on how to build and program a small robot that can roam around, sense its environment, and perform a variety of tasks, using either type of control.

Make an Arduino-Controlled Robot is an excellent book for teachers, hobbyists and experimenters who like working with software and hardware. The book’s simple robot moves about on a chassis that has two-wheel or four-wheel drive. And its heart is an Arduino Uno or Arduino Leonardo microcontroller running programs (“sketches”) provided in the book and available at a link for download.

Some basic assembly is required, including gathering parts and circuit boards and doing some soldering and mechanical assembly, following the book’s instructions. The robot can be built on small platforms from DFRobot or platforms of your own creation. And devices can be added, including distance sensors, infrared reflectance sensors, and remote control receivers.

The book is “not an introduction to programming,” however. If you have no experience with programming or programming Arduino microcontrollers, the author recommends two books: Getting Started with Arduino, 2nd Edition, and Arduino Cookbook, 2nd Edition.

Make an Arduino-Controlled Robot has 11 chapters and six appendices. The chapters are:

Whether you love serious experimentation and invention or just tinkering for fun and mental challenge, Make an Arduino-Controlled Robot opens up many possibilities for individual, family, and classroom activities and learning.